Summer in Arlington: School's out (finally), it's hot (finally), and all you want to do is get wet and eat ice cream! 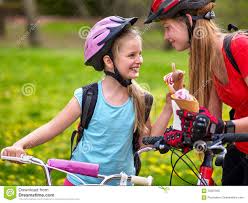 Kidical Mass is here to help. We're going to revive a ride we did last year, with a slightly tweaked route, because it was just that much fun: We're going to start this ride at Hayes Park -- come early and enjoy the SPRAYGROUND (water starts at noon on Sundays). We'll roll out around 4:45pm and meander through the neighborhoods of Virginia Square, Ashton Heights and Clarendon, ending at the Larry's Homemade Ice Cream, which has moved and combined with Spice.

The route is on the short side, and much as flat as they come in Arlington. All crossings of major streets are at stop lights. This route is great for beginners. The route back from Clarendon to the park is short and well signed, but involves one hill that's on the steep-side. Last year, some families sent one rider back to the park, who then came and picked up the rest of the family in Clarendon.

Parking: On the surrounding residential streets.

All are welcome. Hope to see you there!

Posted by Gillian at 4:27 PM No comments: